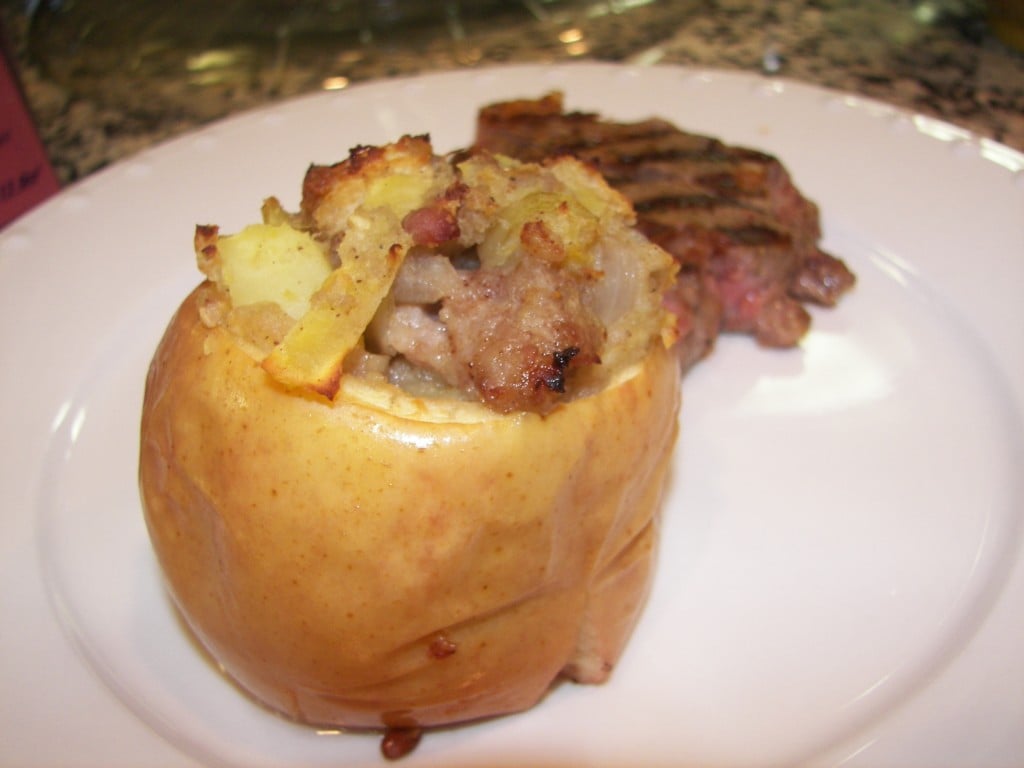 I have volunteered myself to make thanksgiving dinner for my family.  I am very excited to take on the task, but really want to perfect my menu ahead of time.  Last year I made a sweet potato (but they were actually Yams) stufffing.   It was delicious and I knew I wanted to make it again.  A year later I realized I did not remember the recipe, and thought that this is my chance to wing it!  Since I am still in a new house I don’t have a ton of essential ingredients lying around.  So I made a quick list of things I thought would be good and gave it to my loving boyfriend to go shopping.  Being the great bf that he is, he got all of the stuff and I came home to a pile of groceries ready to jump into.  I looked at the sweet potatos and they were just that.  Sweet Potatos.  Not the orange yams that everyone calls sweet potatos for some reason.  I thought it would still be fun to try with the real deal, and it turns out, they were delicious!  I also have seen stuffing in apples on pinterest, so I decided to try it out.  The stuffing recipe makes enough for probably about 10 people, but I only wanted to stuff 3 apples, so the extra I just threw in pan and cooked it as well.  First you want to take however many apples you are going to stuff. 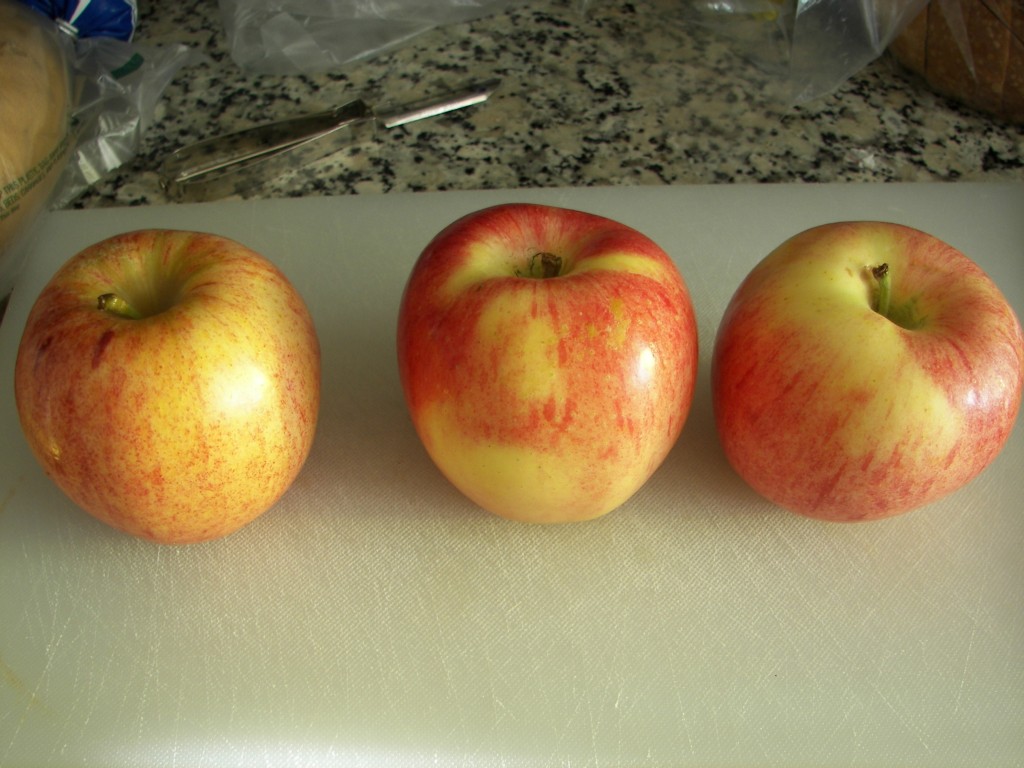 Cut off the tops. 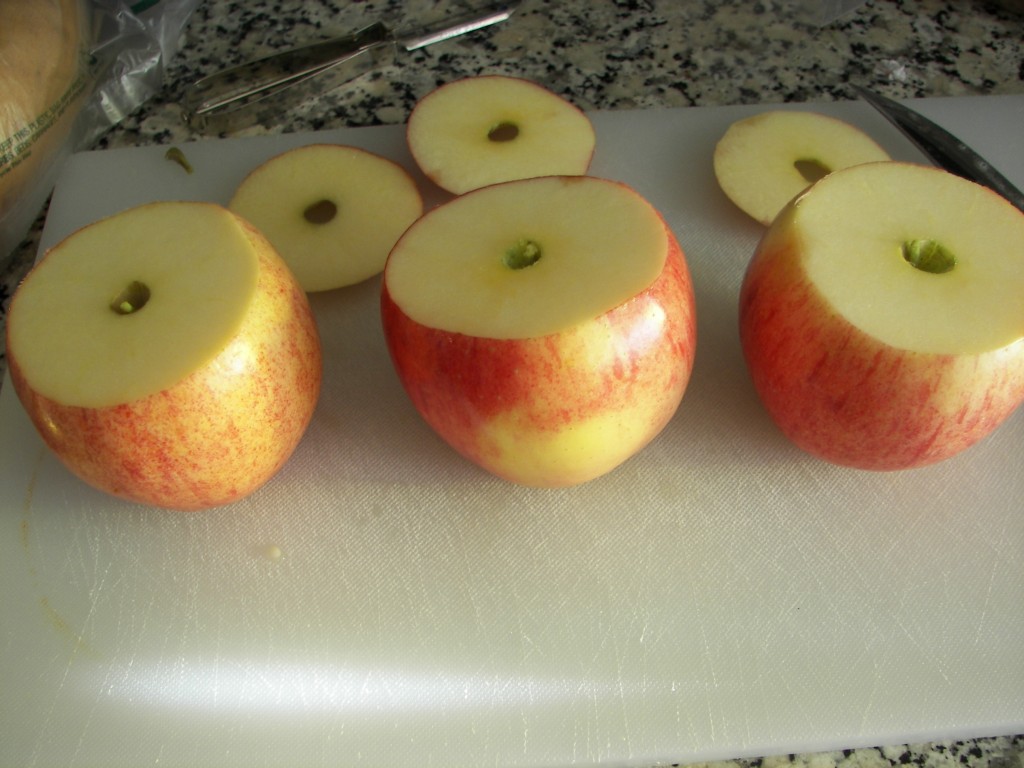 Take out the cores and throw them away, then scoop out the rest of the apple pulp and set aside in a bowl. 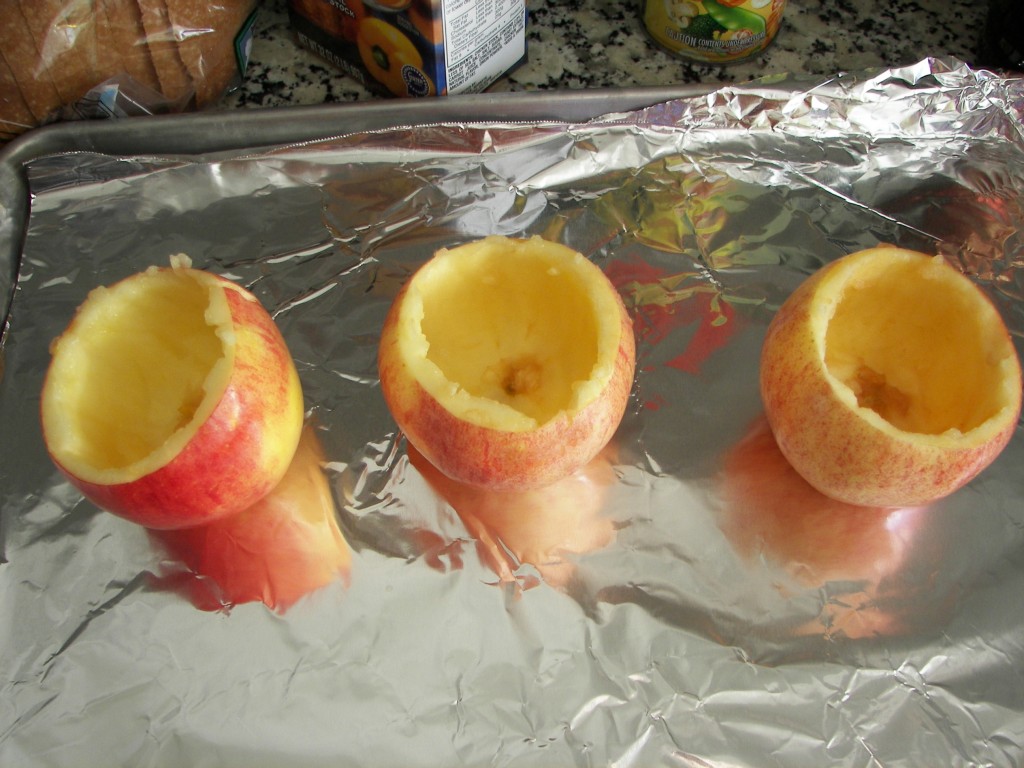 Take a loaf of sourdough bread.

Cut the bread into cubes and measure out 4 cups.  Toast them in the oven. 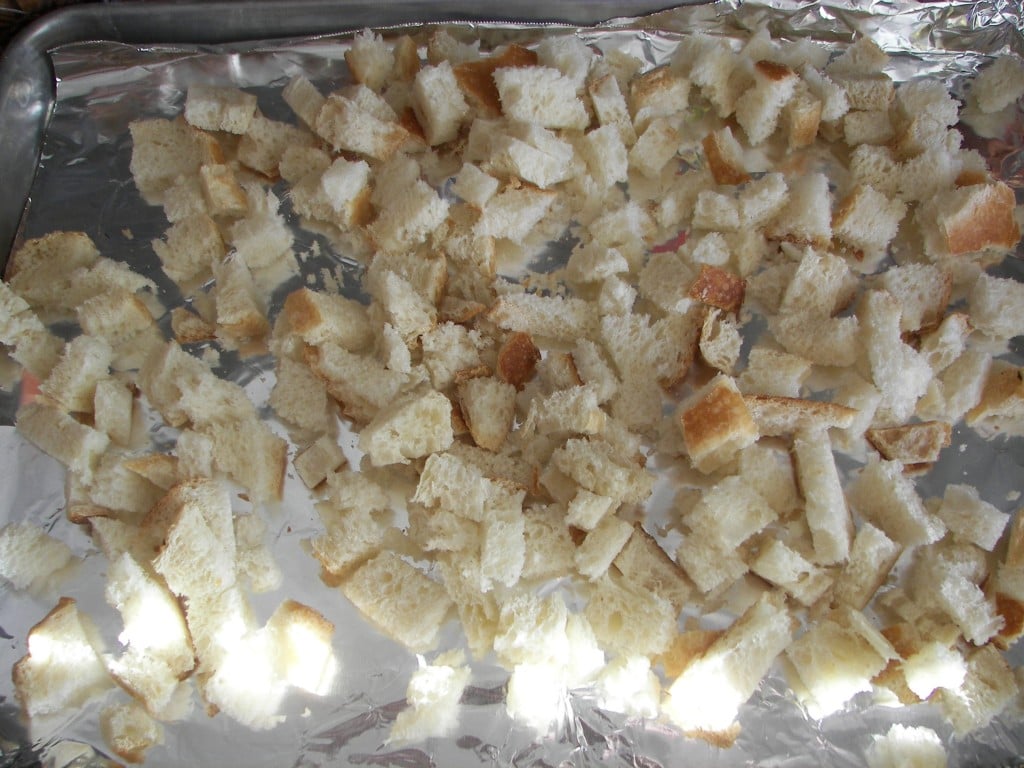 Cut up an onion.

Roughly chop up your apple pulp. 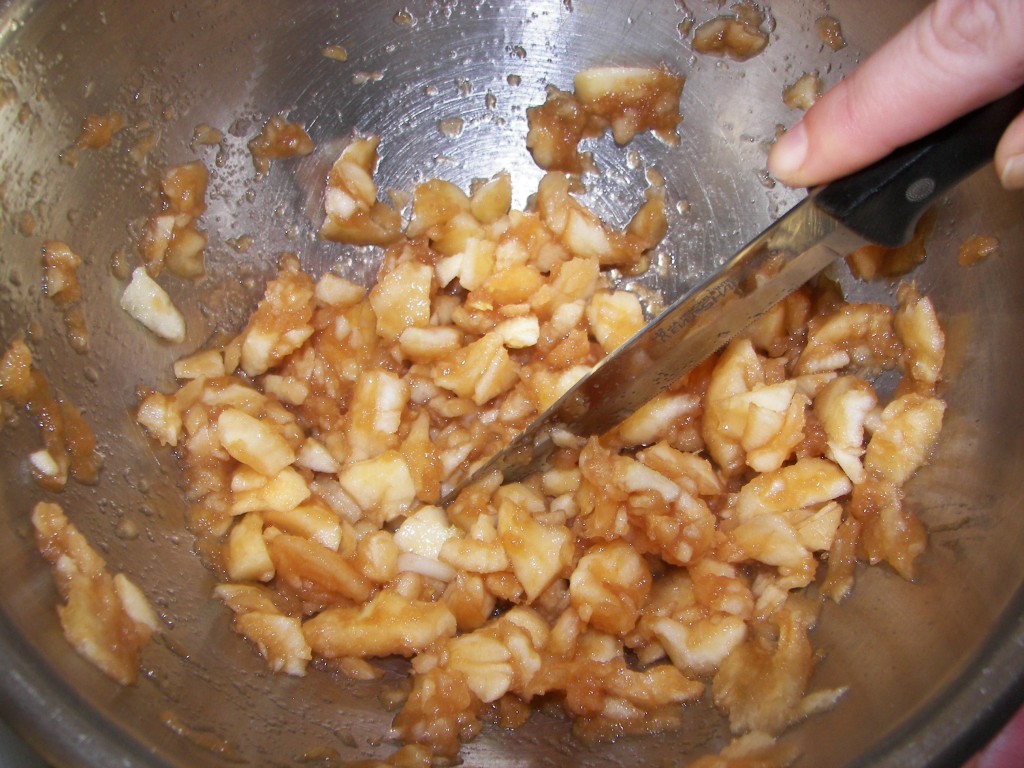 Cook butter, onions and sausage and season with salt, pepper, cloves and cinnamon. 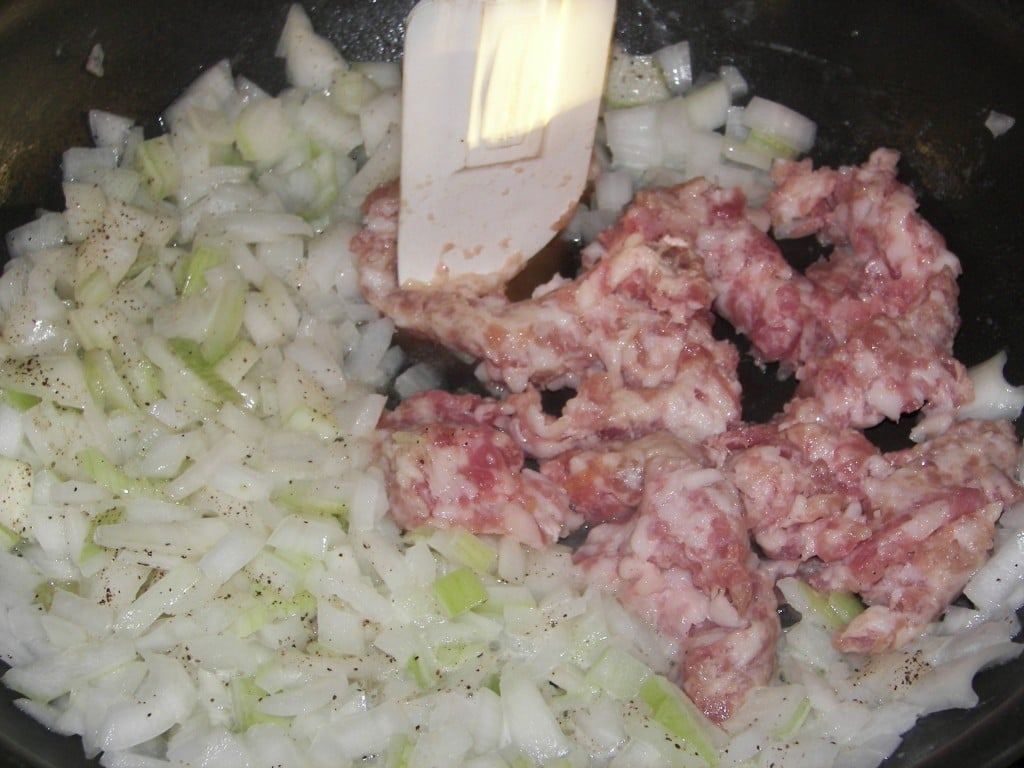 I cooked my sweet potatoes in the microwave to save time, and peeled the skin off when they were done. 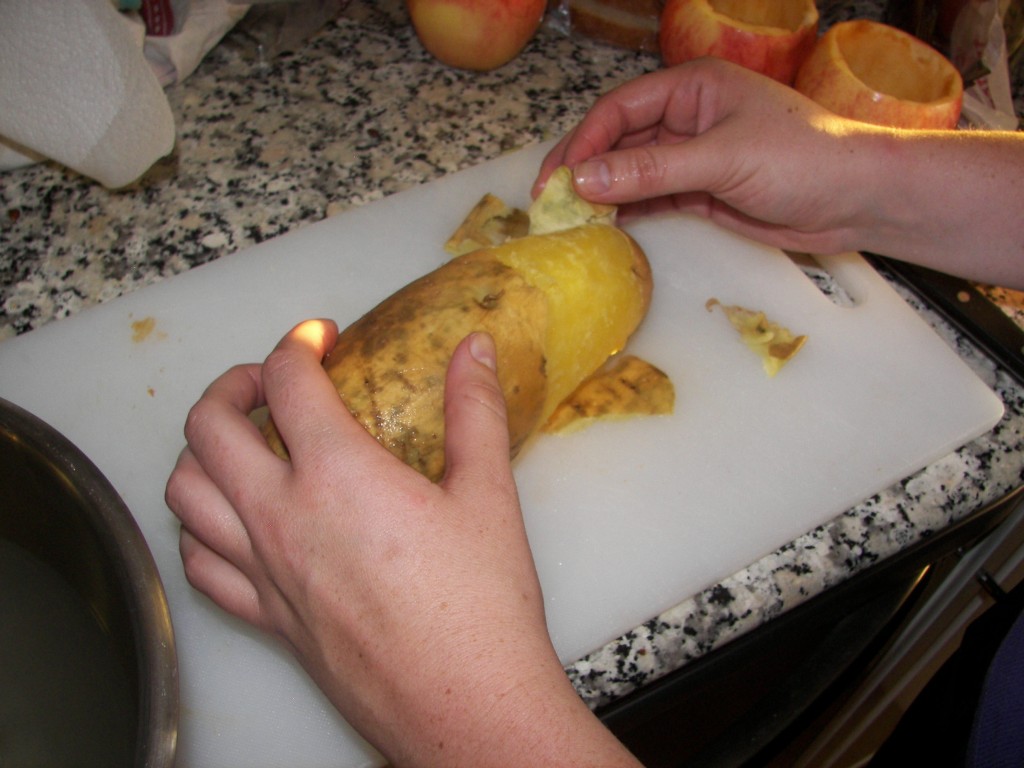 Then I chopped up my 2 sweet potatoes and threw them in a large bowl. 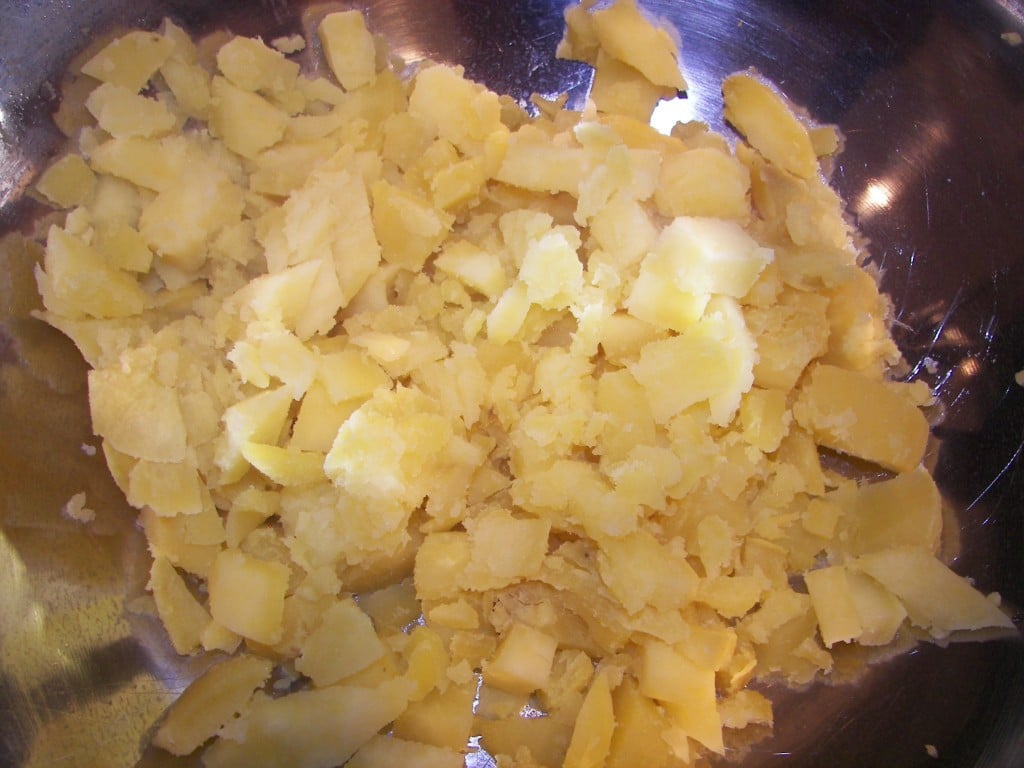 Then added my croutons… 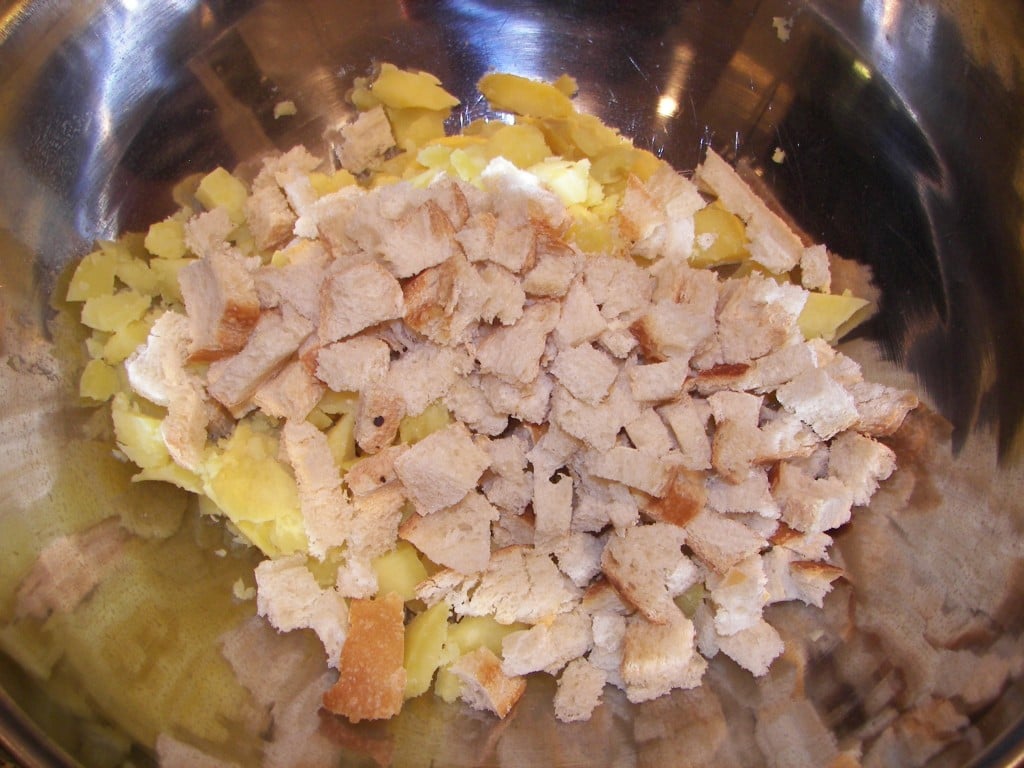 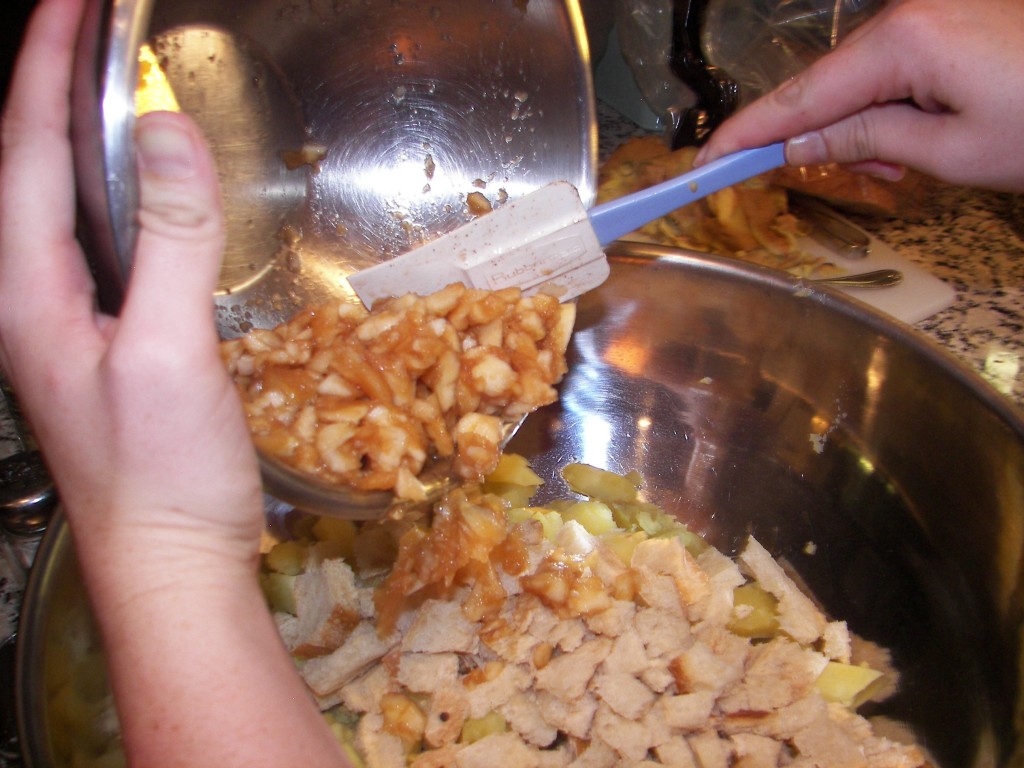 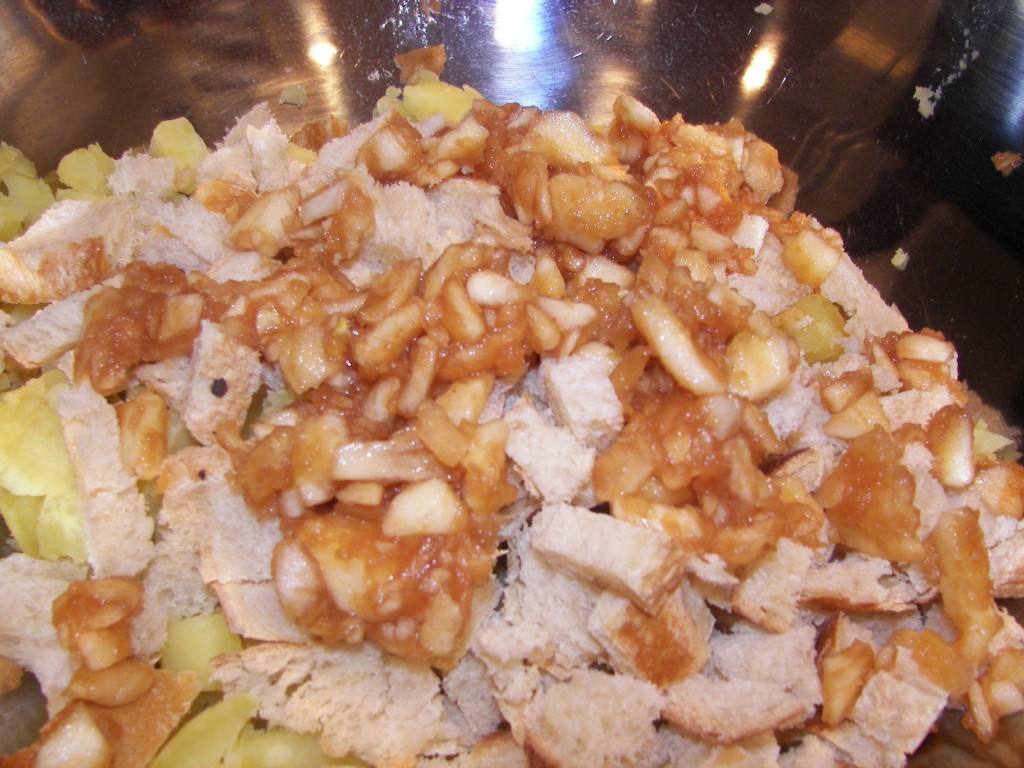 Then onion and sausage mixture… 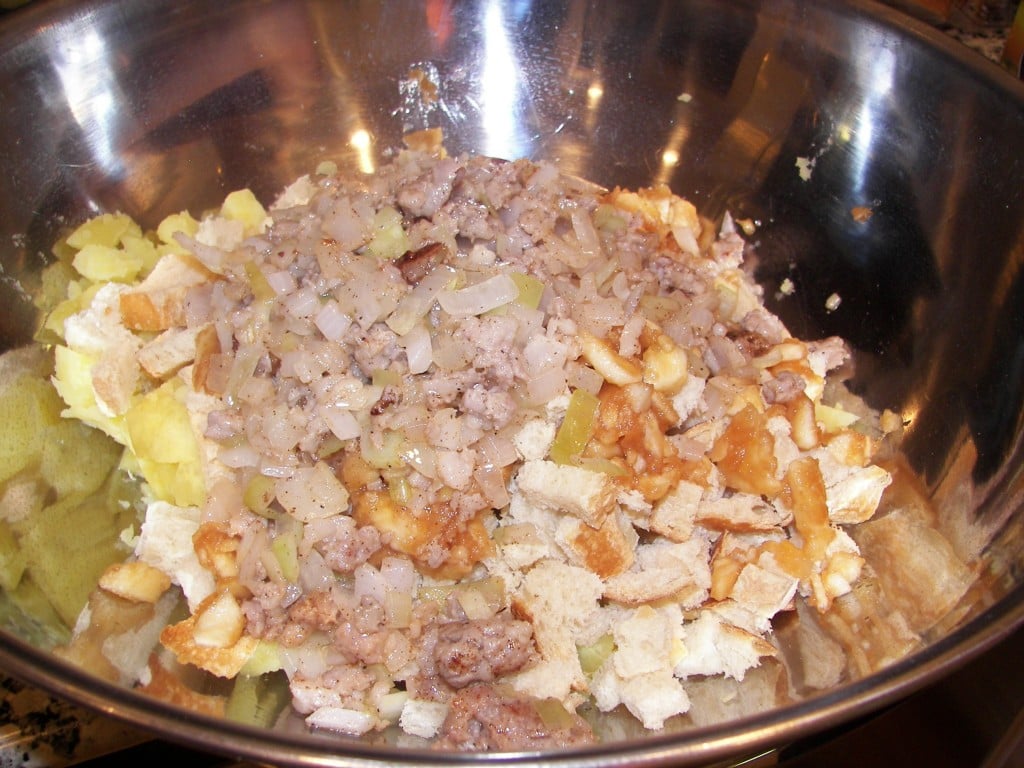 And finally chicken broth.  Then I seasoned with a bit more salt and pepper to taste. 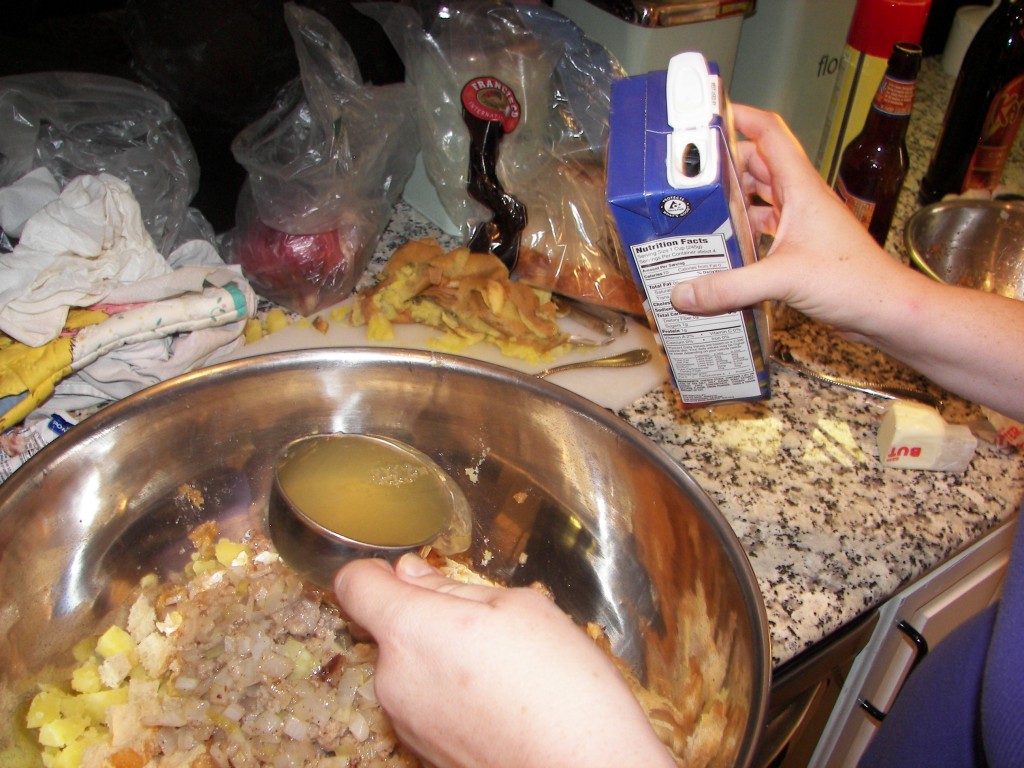 Once I mixed everthing together, I scooped it into the apples. 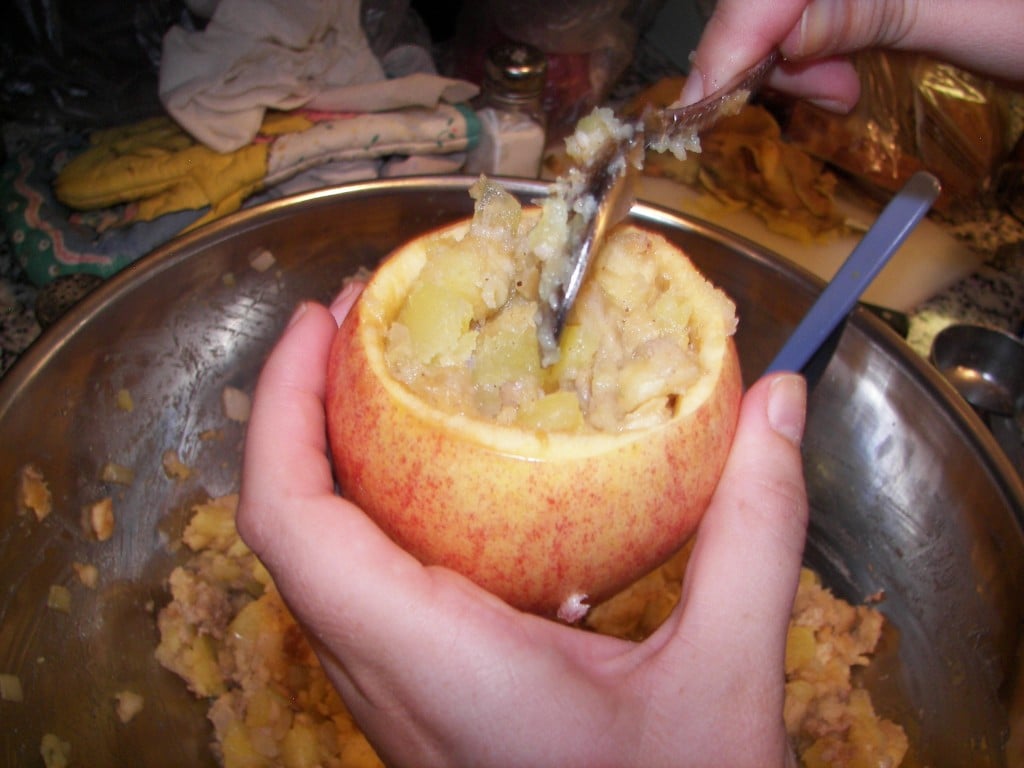 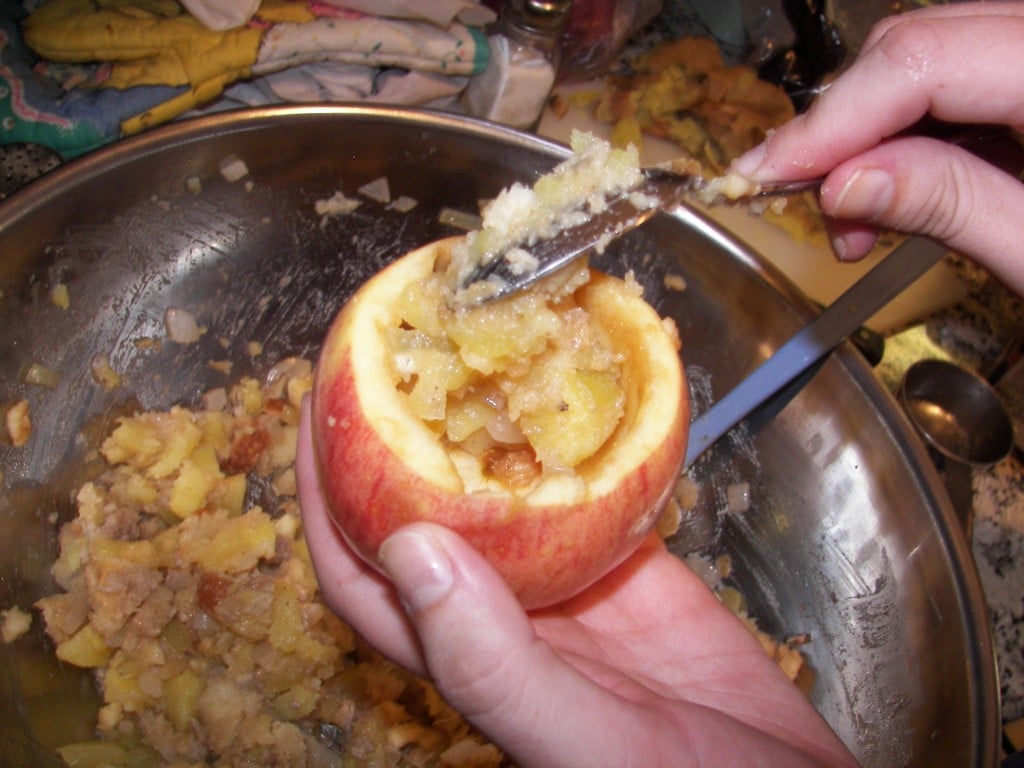 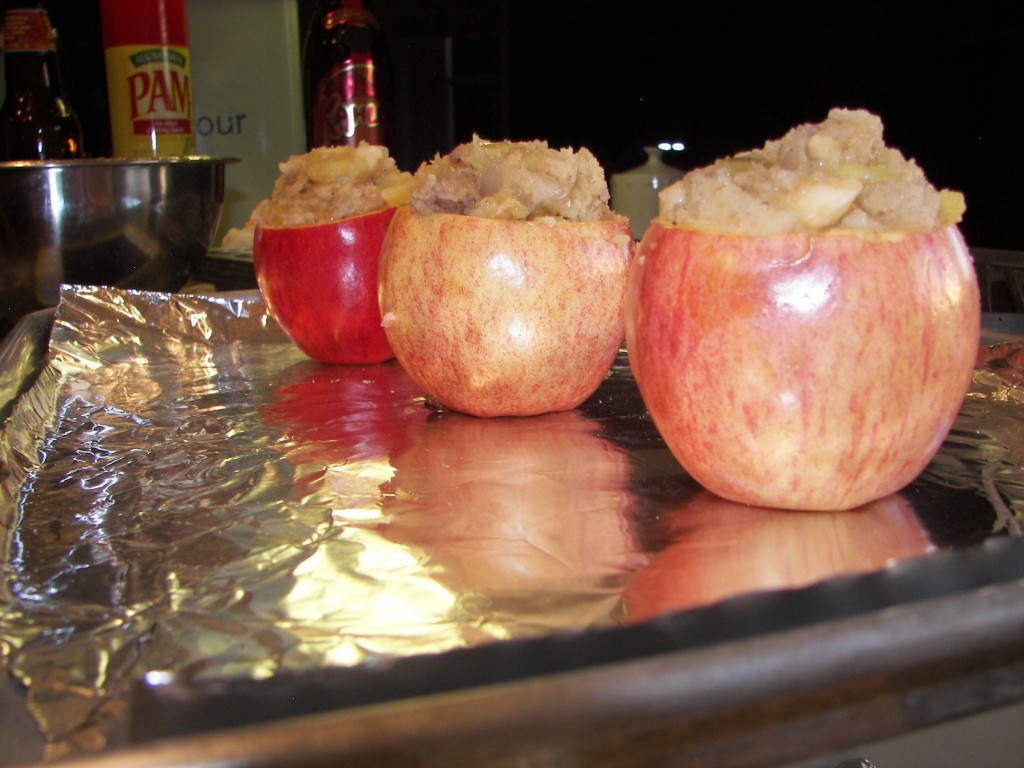 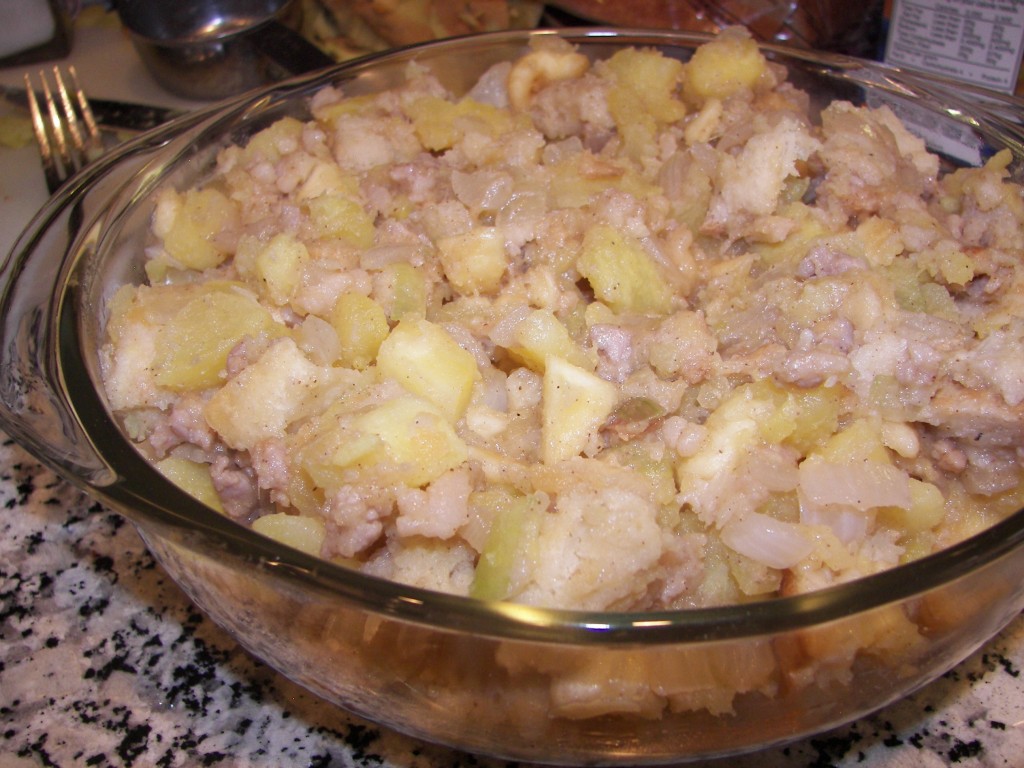 Then I cooked both the apples and my stuffing at 350 for 30 minutes. 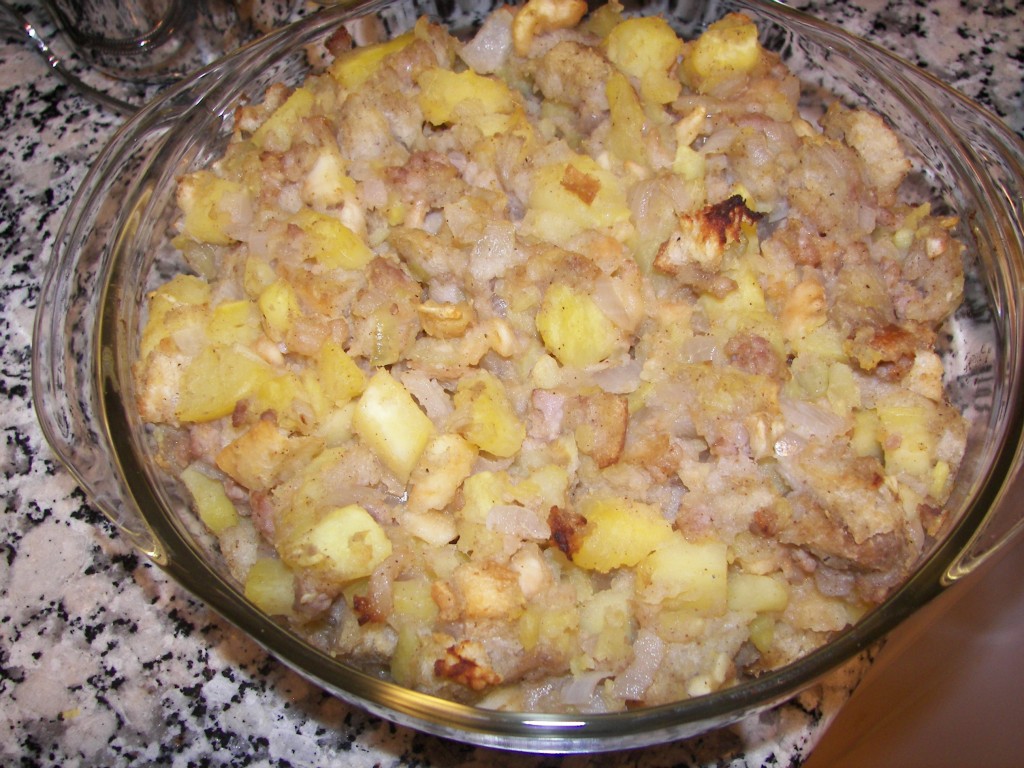 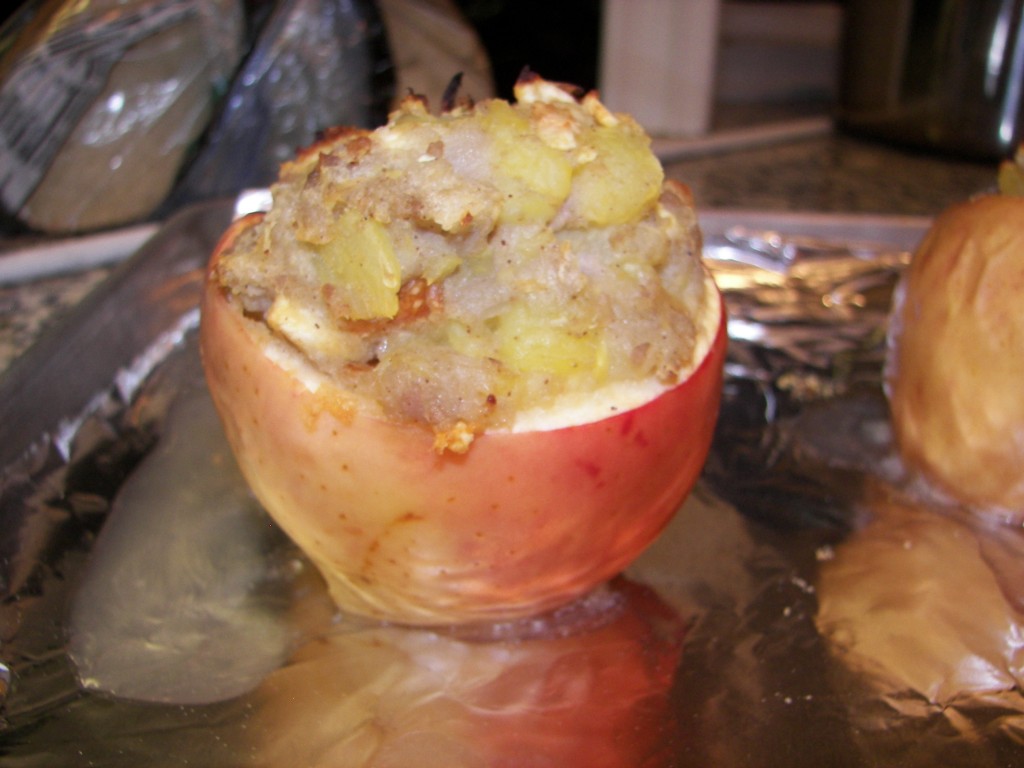 We had these apples with some steak that my boyfriend/photographer/su chef  grilled up. 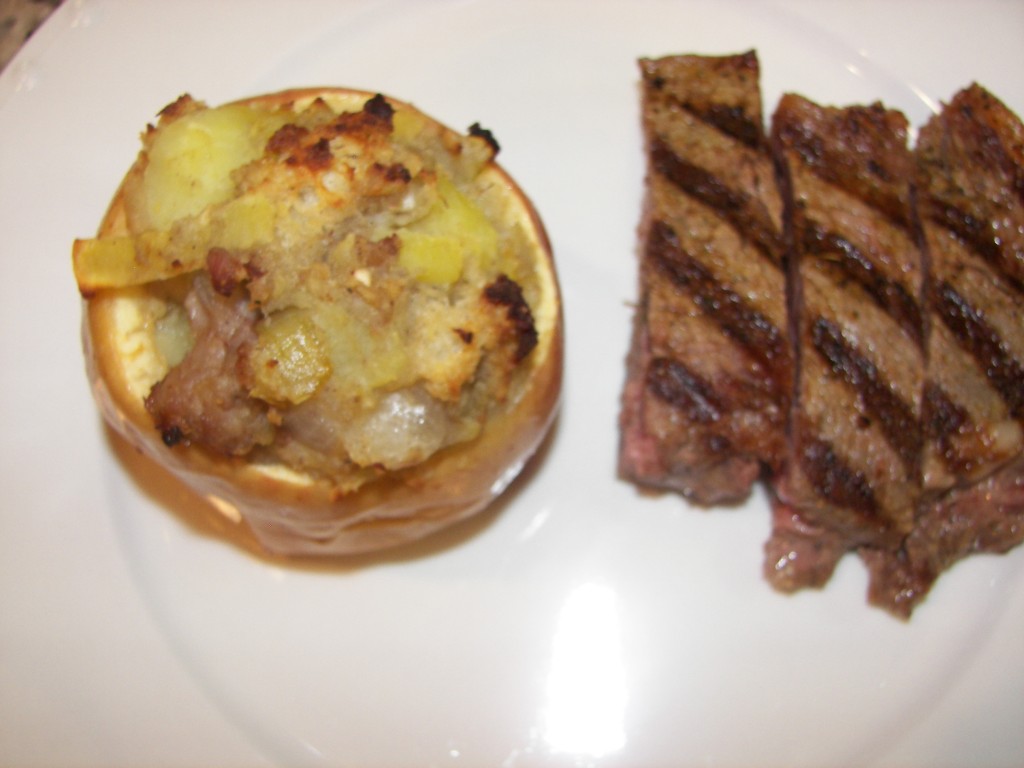 Apples (1-10 depending on how many you would like to fill)
4 cups diced sourdough bread
2 sweet potatoes
1/4 cup butter
1 onion
1 cup sausage
1/2 tsp salt
pepper to taste
1/2 tsp cloves
1/2 tsp cinnamon
1 1/4 cup chicken broth
Directions:
Preheat oven to 350 degrees.  Cut off the top of your apples and take  the core out (don’t go all the way through). Scoop out most of the remaining apple pulp and set aside.
Cut about 1/3 of a loaf of sourdough bread into cubes until you have 4 cups.  Place cubes on a baking sheet lined with aluminum foil and bake for about 9 minutes.  Remove bread from the oven and set aside.
To cook sweet potatoes by microwave, rinse them and stab with a fork a few times.  Wrap each indivdually in paper towels and cook for 5 minutes on high.  Then flip them over and cook for an additional 5 minutes.  Once they are done, submerge them in a cold bowl of water for a few minutes to cool them down so you can handle them.  Once slightly cooled, peel the skin off and chop into bite sized pieces.
While the sweet potatoes cook, take a medium saute pan and place over medium heat.  Melt 1/4 cup of butter, and add your chopped onion and sausage to it.  Season with salt and pepper.  Cook until the onions are translucent and sausage in fully cooked.  Add 1/2 tsp ground cloves, and 1/2 tsp cinnamon.
In a large bowl combine, chopped sweet potatoes, bread croutons, apple pulp, onion and sausage mixture, and 1 1/4 cup of broth. Season with salt and pepper to taste.
Take you apples and fill them with stuffing.  If you have extra stuffing, fill a pyrex pan.  Bake apples/ stuffing in the oven for 30 minutes.  Enjoy!


We are participant in the Amazon Services LLC Associates Program, an affiliate advertising program designed to provide a means for us to earn fees by linking to Amazon.com and affiliated sites.
Diet dinner littlebitsof lunch Meal pork Protein Recipes side dish vegetarian